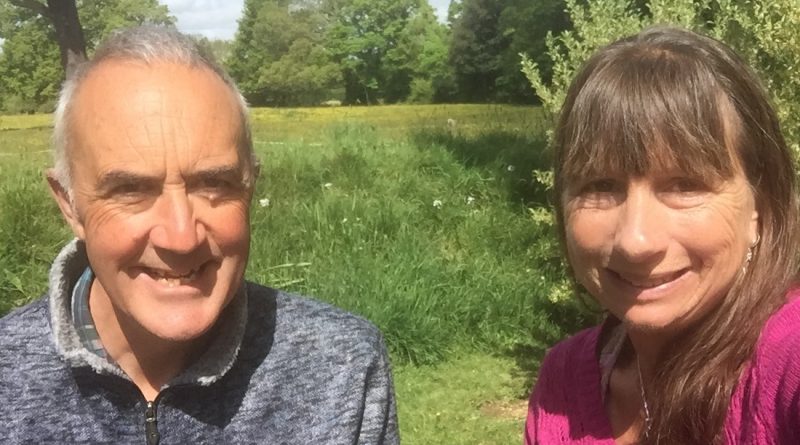 I`m writing these thoughts in my home in Devon, overlooking the Exe Estuary, where we have so many fond memories. We are both looking forward to coming to serve you in Trelawny Benefice, along with Bluebelle our black lab. We anticipate moving in early February before my Installation on 24th a month under thirty years since I was first ordained.

I met Harriet some thirty-four years ago while she was at college in Exmouth and knew I was on to a very good thing and married her six months later at Christ Church Exmouth. We have three children. Josh who teaches at Blundells in the junior department, including games and his fiancé Ana who is a community physio on Exmoor. They enjoy Exeter Network Church, when times permit. Identical twins Rosie and Jas whom I married three years ago this summer within six weeks of each other. That was a costly summer…….! They both live in Penwith and love Cornwall. Jas is a physio married to Chris they married at St Winwaloe at Church Cove on The Lizard. Chris assists in Leadership of Harbour Church Falmouth. Rosie is a nurse and married Jake. They are active members at Engine House Church Redruth. I still have an 85-year-old dad John whom I’m going to have the privilege of marrying to Penny in the summer at St Mary Redcliffe, Bristol our home church. They have both lost lifelong partners.

I myself found faith whilst doing my PGCE in Exmouth at Christ Church where I had the privilege of becoming Rector myself from 1993 to 2002. The church grew rapidly being a diverse community with lots of young families and students and a wonderful band of older ladies who prayed for the growth we saw.

We went as a job lot to Millfield in 2002 where I taught some RS and lots of sport. Harriet taught in the juniors and ran junior teams. All of our children represented Millfield in all the team sports. Rosie and Jas with twin telepathy staving off many attacks. Josh captained Devon at rugby and was lifted in the lineout by Mako Vunipola! I had the privilege of coaching and umpiring a number of boys who play county cricket and one or two have played for England. A number of my little boys also entertain me now playing premiership rugby! I’ve have been able to sow so many seeds in so many young people’s lives. My knees were going although I was still refereeing and coaching at a decent level in my mid-fifties. So, it was off to Brecon as I sought something a little less strenuous. I have had a wonderful little innings modernising their chaplaincy and coaching and refereeing at a lesser level but just as fun as I’ve tried to put something back. I’ve filled in doing a house for duty position in Devon which has renewed our heart for pastoral ministry.

So here we are coming to Cornwall. We quite literally walked the parishes in October along the coast path, up the estuary from Polruan to Lanteglos and visited inland to Pelynt and Lanreath. Something just clicked that there was a delightful inheritance for us in Cornwall. We both love walking with Bluebelle and have spent many happy hours especially this summer ticking off more sections of the South West coast path. We spend a lot of our holidays in Switzerland where we have a static in the mountains near Wengen. On days off too we are often found sat on the boundary at Taunton watching Somerset. Its lovely that some of the boys I’ve coached play and they still drop by for a chat.

We are both looking forward to getting to know you all when things inevitably become safer in time. The Rectory garden will be just the job for barbecue’s! If you’ve a community event drop us an invite. We are especially looking forward to creating some of our services to be accessible for families and children as well as welcoming so many holidaymakers in the summer season.

All the kids at school call me `The Rev` or `Rev`. Feel free to keep the tradition going!